Robots are making buildings, driving cars, cleaning houses, mowing lawns, working in banks and now will also manage hotels. In Japan, Henn na hotel (which appropriately translates into ‘weird’) recently opened its doors for guests from across the world. It is a budget hotel but what sets it apart is the fact that it is largely managed by robots.

You are greeted by a female humanoid at the front desk (or a slightly scary dinosaur if you would prefer English over Japanese). The guests have to respond by pressing keys at the desk. This hotel runs as a part of an amusement park and according to the hotelier, this move isn’t just a gimmick but a serious attempt to employ technology to increase efficiency. 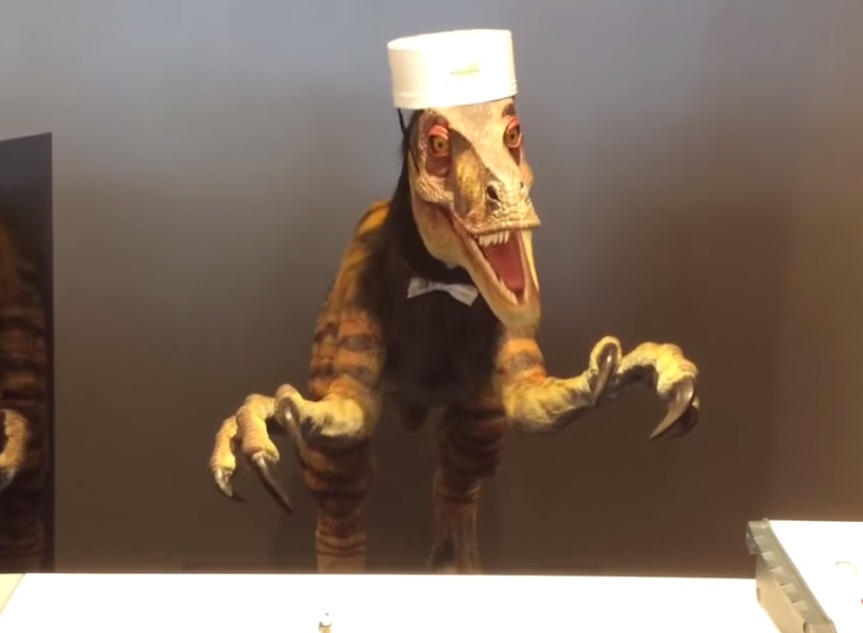 What is beyond the front desk?

At this robot hotel, guests don’t have to bother about carrying room keys, and no there aren’t any mobile based keyless systems in place like Starwood. A digital image of the guest is saved during check-in which is then used to unlock the room door using facial recognition technology. The luggage is carried to the room by robot porters and another tiny robot inside the room tells you the weather and sets your alarms. There are actually no human beings at this robot hotel and the only role that they have is to monitor the functioning of the system.

Are they the only one doing this?

Miles away in United States, Aloft, a Starwood brand, is experimenting with Botlr, a robot which looks straight out of Star Wars series and can potentially handle the job of routine room-service inside the hotel. Developed by Savioke, this little robot can hold small items like toiletries and newspapers and deliver them to the guest rooms. The hotel staff has to load the requested items and dial in the room number. With pre-programmed maps and motion sensing technologies similar to Microsoft Kinect, the Botlr can find its way around the hotel. You can watch the video to see Botlr in action.

In New York, YOTEL uses robots to take care of jobs like making coffee, delivering laundry, cleaning rooms and other similar jobs. It is not just the robots that hotels are experimenting with. New technologies like keyless entry, mobile check-ins, smart mirrors and many others are going to change the human dependent hotel industry. While the adoption is picking up gradually, we do expect premium hotel chains to integrate the technology driven experience as a customer retention strategy.

Should we expect a robot hotel in India?

Booking a hotel has always been a costly affair in Japan. A room night at a decent hotel in Japan can cost around $200-$220 and Henn na is offering rooms at $80 putting it in the budget segment. Of course, the initial investment would have been high for the hotel but in the near future, they should be able to make sizable savings on operating costs. The population of Japan is declining and there are a large number of old people. The immigration policies are also very strict. This leads to very high labour costs and thus employing technology will help cut costs. In India, the scenario is quite the opposite. The labour costs are so low that you cannot actually imagine a human staff being replaced by a programmed robot.

As is the case with new technologies, shifting towards the robot driven hotels will require heavy initial investments. The budget hotel market is still developing and most of the luxury hotel chains are bearing heavy losses. They might not like the idea of another huge investment when they are already grappling with these losses. If a hotel tries to do something similar to Henn na in India, it would be more about making the news and hogging the limelight instead of solving a real user problem.

In California, Botlr isn’t exactly replacing their hotel staff. It is acting more as an enabler to assist the staff in running errands that would otherwise keep them occupied. The delivery of small items will be faster and won’t require having staff members waiting as standby to fulfil the requests. The Savioke team has worked with elevator companies to develop a system that allows Botlr to operate lifts via Wi-Fi to achieve the same.

The Indian hospitality industry can perhaps pick up nuggets from what these hotels are doing to improve the experience of guests, but a hotel like Henn na is still a very far-fetched idea. Delivering late night snacks, assisting differently abled people, controlling room lights digitally and faster check in systems are some areas where they can make a head-start.

It is still too early to comment on how much of an impact the entry of robots in hotels can make, especially in India, but sooner or later, they are going to enter the hospitality industry. Who knows the battle between budget hotel chains might evolve to a different level alltogether

What we have seen until now is just a start and the future enhancements to such systems could bring a lot more to the table. What’s your take on the robot hotels? Do you think we will see something similar in India soon?

#BeautifulMalaysia: Tourism Malaysia promotes the destination with a photo contest