One way to endure a long flight is keeping your smart device updated with the apps that are engaging enough. Airlines are coming up with in-house apps that keep the travellers connected and enhance their flying experience. They inspire the traveller when they’ve not yet decided to travel by giving them a quirkier option to enjoy their in-flight experience. They create a connect with the user by providing them with an alternate leisure way of travelling. This listicle highlights 5 apps where airlines have made an effort to augment the flying experience of the consumer. 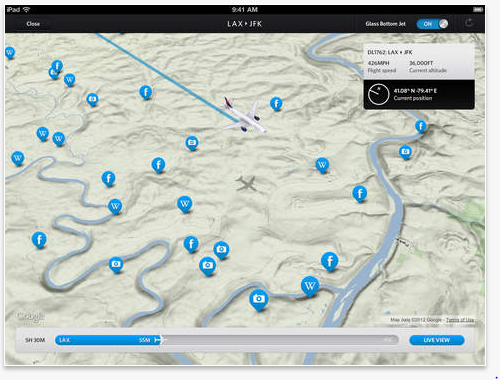 Fly Delta by Delta Airlines takes flying to a whole new level. Glass Bottom Jet enables users to see the interactive map of what exactly they are flying above. The app also features the traditional destination guides and the flight booking, as well as the possibility to scroll back and forth along the flight path to see where they’re heading and what might have they missed out. The places are marked by the fellow users on the social network which helps the consumer to know what to do, based on their opinions.

Available on iTunes for your iPad

American Airlines– Know It All 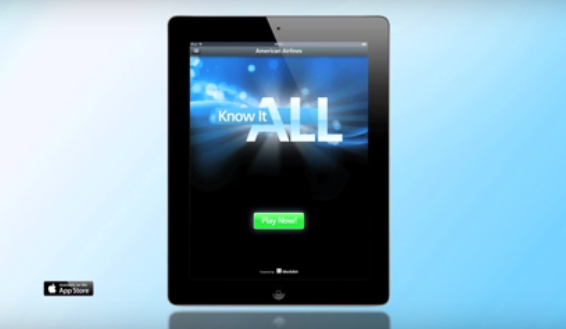 American airlines have integrated gamification and P2P connectivity by providing an interesting platform.The most appealing aspect of this app is that it introduces an element of in-flight gaming, allowing users to compete against each other using plane’s Wi-Fi network. This trivia game has successfully integrated account information and provides one-touch access to passengers to check flight details, get mobile boarding passes and select seats.

Air France– Music in the sky 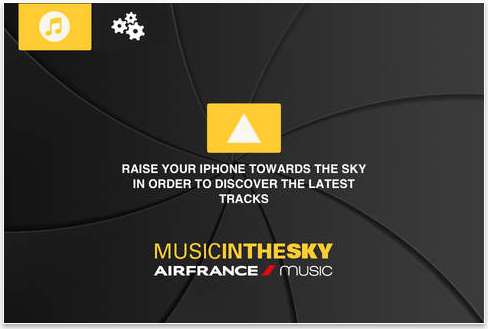 Air France came up with an interesting app that finds ‘music in the sky’. That being said, the airline puts it, that they have “scattered hundreds of songs through the skies around the world” and users can find them by pointing their phones to the skies and “catching” them. There are different songs in the different part of the world meaning that the user can “catch” them while travelling. To incentivize usage, the airline integrated this activity with series of games which allows users to win prizes if they first managed to find them. 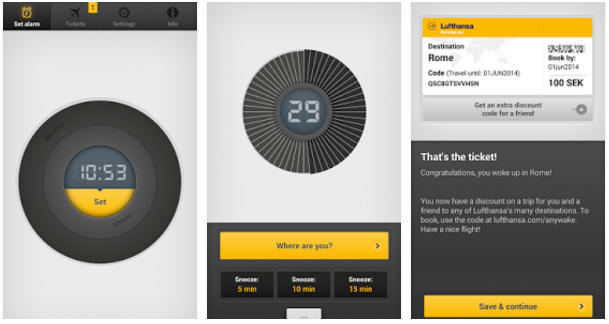 Lufthansa applied its innovation in providing an alarm clock app to its users in Sweden. This new app allows Swedish users to wake up to the sound of the randomly selected city and asks them to guess “where they are”. If the answer is correct, the user gets a flight code to book a flight to that city. The app targets the user in the very first stage of travel cycle where the user hasn’t yet decided to make plans but might do so by external factors like hearing the sound of an exotic destination while getting up for work or seeing travel pictures posted by friends. 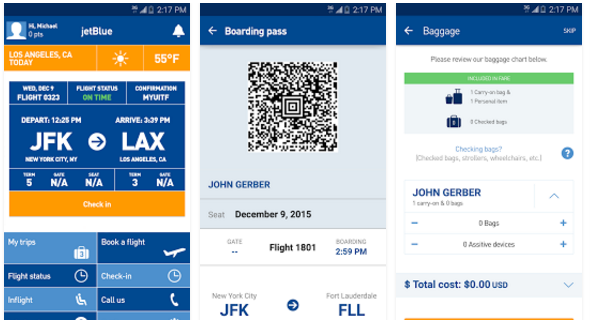 This app has provided the user with an interesting home screen that changes based upon the user’s position on the travel cycle. This home screen allows users to access all the information they need without having to navigate the app. Some of the offers on the in-flight part of the trip enable the user to receive notification for the airline’s DirectTV schedule. It also permits to offer conventional tools such as the possibility to check the in-flight menu. The app’s social pinch is expressed by posting “customised postcards” on the social network and sharing with the friends.

These were some engaging apps for the flyers. Read here to know what’s in for the carefree backpacker?

Boom plans to bring back the Concorde days while being affordable