Remember the sordid Twitter saga of badminton player P V Sindhu on the treatment meted out to her by IndiGo’s ground staff? Barely a week passed after the dust had settled on that incident when the low-cost airline landed itself in yet another snowballing controversy. 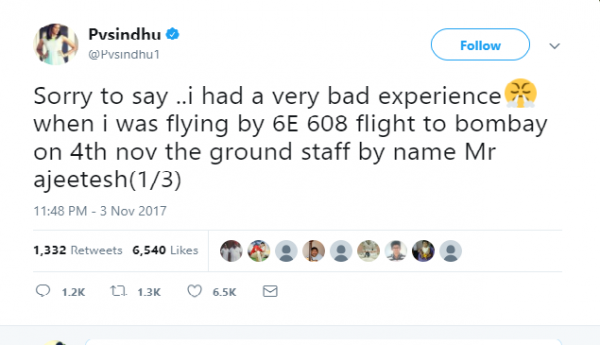 A video showing the airline’s ground staff beating a passenger surfaced causing a major uproar on social media. The incident that took place on October 15 at the Delhi Airport tarmac surfaced only recently and spread like wildfire. A passenger, after getting down from his flight, is seen waiting for his bus to the terminal, when he gets into an altercation with an airline ground staff as the latter asks him to be in line with airline protocol and not abuse the officials. The video goes on to show how the ground-staff doesn’t not let the passenger board the bus and is further manhandled by them.

Soon after the video went public, the backlash was immediate. The situation went out of control when news about the airline firing the whistleblower came out. IndiGo’s much delayed response added fuel to the fire. On Twitter, the #boycottIndiGo has been now trending for the last two days, while the stock price of IndiGo’s parent company, Interglobe Aviation Ltd, also tumbled as much as 5% on Wednesday.

To make the situation worse for IndiGo, other major airlines jumped into the fray to leverage some social media noise out of the saga. While Air India took a dig at Indigo by posting a creative that said – “Unbeatable service” – highlighting the ‘beat’ aspect, Jet Airways also took to releasing a creative that said – “We beat our competition, not you”. Adding to this crisis are innumerable jokes, memes and hashtags ranging from ‘#Indigoons’ to ‘#MeToo’. 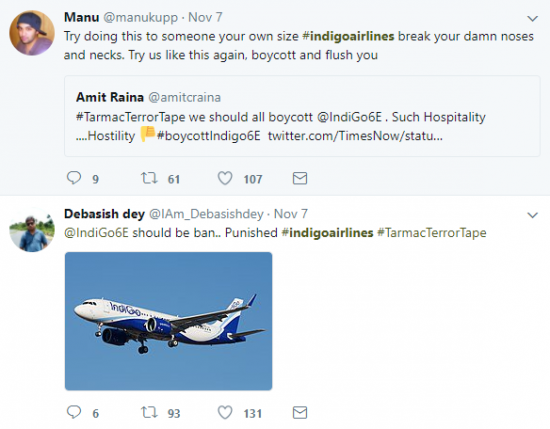 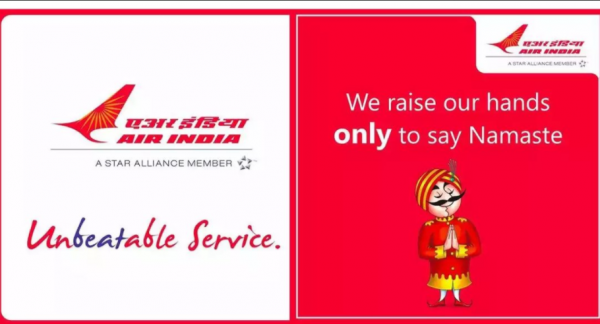 Getting irate customers is not new to businesses in the service industry and incidents like these that majorly impact a brand’s reputation have happened every now and then. So, where exactly did IndiGo go wrong?

According to multiple reports, IndiGo had prior knowledge of the video. Taking a cue from the United Airlines incident, where the staff had forcibly removed a passenger from the flight by dragging him out, IndiGo should have taken preemptive measures. The Director of the airline, Aditya Ghosh, chose to break his silence on the issue only when the issue became big on social media. Had the brand owned up to its mistake proactively, the crisis probably wouldn’t have happened. Moreover, gauging the brand’s response on social media, it seems like they were completely out of touch with what was happening on social media and had no plan of action. For a company that is as marketing and social savvy as IndiGo, it brings up the question of whether the airline thought they would easily get away with it.

In the age of digital, brands can no longer afford to sit back and pray that their troubles will go away (How travel brands can prevent social-media goof ups). Had IndiGo placed a crisis response team on spot to deal with the backlash, the situation could have been handled better. Even now the customer support staff seems unprepared for the trolling that’s happening, with delayed to no response on most posts. 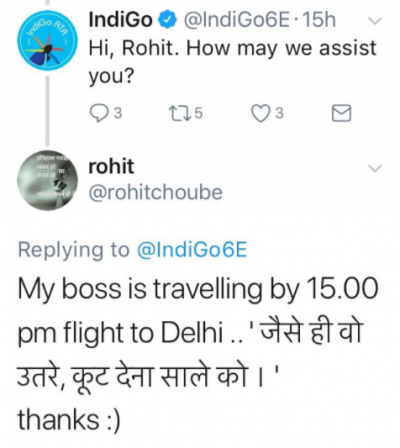 What IndiGo needs to do now is resolve the issue on priority, and then go back to the table and understand how to be better prepared for a situation like this in future. Brands tend to underestimate the enormity of a crisis. With social media, what ends up happening is that people who are not actively involved with the brand also start commenting on the issue, as it allows a platform to people to be a part of every crisis in the world and have an opinion about it.

In times of crisis like this, it is crucial for brands to stay on top of the issue by following up with regular, public updates. It’s important to reassure customers that they are the brand’s priority, but most importantly, it is vital to assess the underlying factors, implement a long-term solution and deliver a dignified closure to the issue.

We spoke to renowned brand consultant, Shubho Sengupta for his views regarding the controversy and how the sensitive travel industry can handle crisis situations in the future.

Assam Tourism’s campaign with Priyanka Chopra is winning the internet