Flight metasearch engine Skyscanner has always been quick to adopt new trends, be it is a new marketing channel or a new technology. Earlier Skyscanner had made headlines with their innovative 24 hour Periscope campaign when Periscope was relatively new and gaining traction among users. Now, only a few weeks after Facebook opened up the Messenger platform for third party developers, Skyscanner has introduced a chat bot which allows travellers to look up and book flights with ease without having to search through the website. 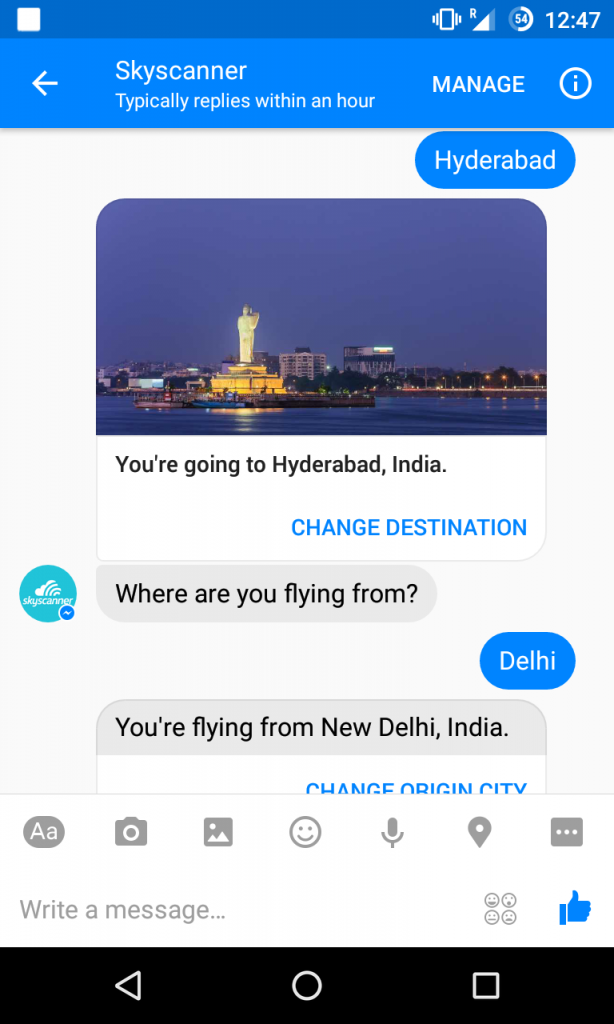 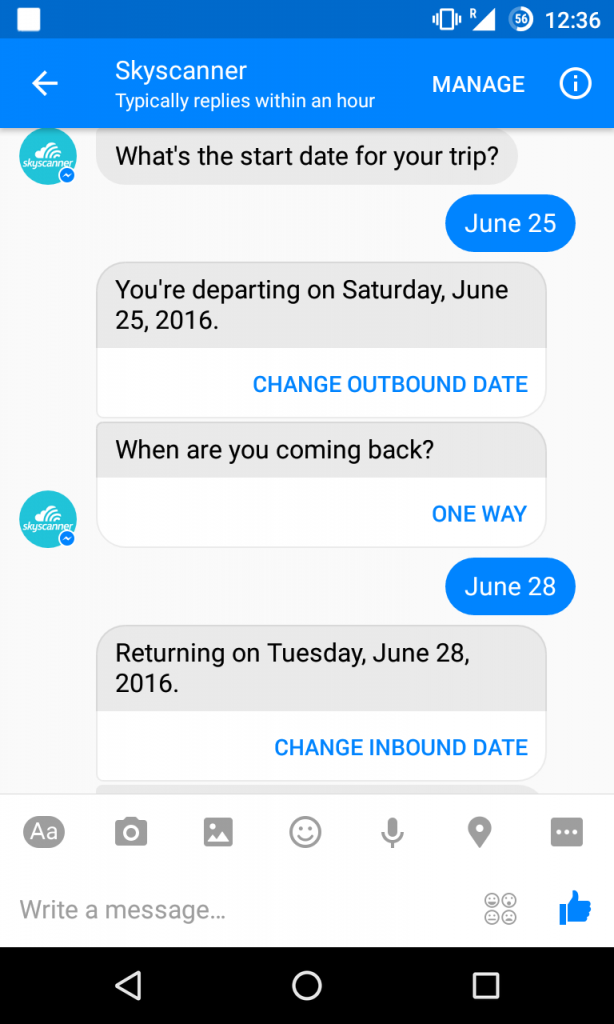 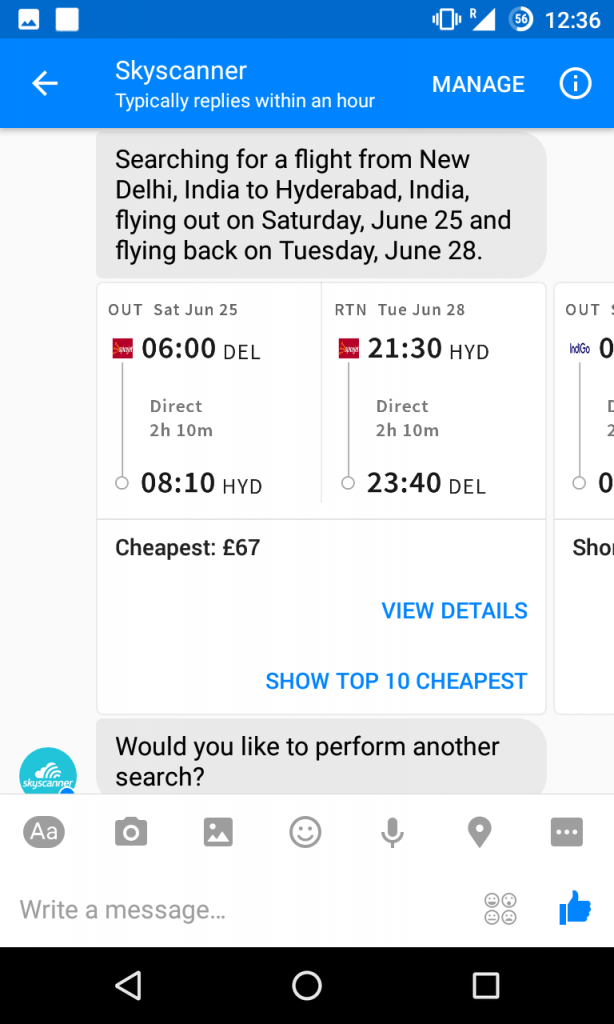 As of now, the bot only offers flight search services although Skyscanner’s app offerings also include hotel search and car rentals. The bot is available in English only for now and the currencies are limited depending on the language (English US or UK).

The bot would ask you to provide your destination, source and dates of travel, essentially the data you would enter while searching for your flight on their website, without visiting the website or downloading the app. The bot also carries the ‘search everywhere’ feature from the Skyscanner website, so it will also recommend destinations depending on your source airport.

The bot is quick to respond to queries however, you have to keep them simple. Precise responses which are the direct answers to the bot’s questions will take you to your desired flight results but the bot isn’t able to process detailed inputs very well. For instance, when we adhered to the one or two word inputs, the bot offered the desired search results but as soon as we tried using a complicated phrase, including the source, destination and travel date, the responses weren’t as expected. The bot follows a hierarchy and you have to adhere to that for now. 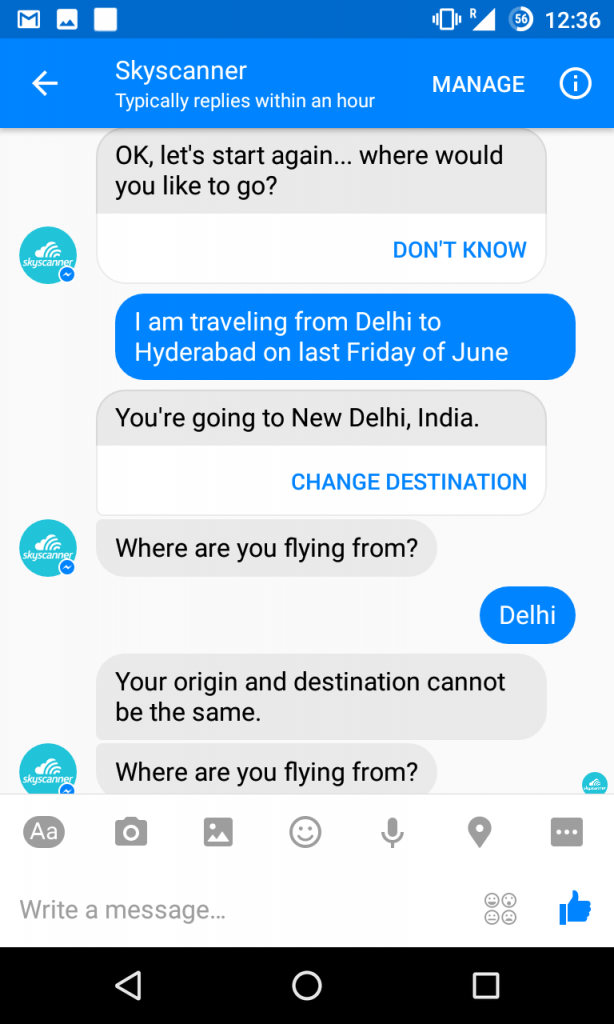 This could be because it is still a very young product and the functionality is limited at this point. Judging by how Skyscanner has previously embraced technology, we can safely assume that we will see lot more features being added to this Messenger bot. Skyscanner also offers hotels and car rentals and they might also offer these through the chat bot in near future.

Chat bots are being seen as the next big thing in travel industry, a fact that Skyscanner highlighted in their blog post. The recently introduced bot will not only open up a new sales channel for the brand but also help them position themselves as a tech savvy brand which is ready to adapt quickly to serve the customers better.

Apps were the hottest topic of conversation in the tech industry until a few years back but over time, the average number of apps an individual uses didn’t rise considerably. According to the data shared by Lee McCabe, Global Head of Travel, Facebook during Phocuswright India, the average time spent by users per month on apps increased significantly from around 23 hours to 37 hours from 2012 to 2014 but the average number of apps used continued to be almost the same. Most of the time is spent between a handful of apps, primarily social media apps and messaging services and that is where the brands want to be visible. With 900 million monthly active users on Messenger, it offers wide reach and unlike an app, a bot is available for use immediately without the time or storage requirement.

The Skyscanner bot is easily accessible through their Facebook account. You can head to m.me/skyscanner to take the bot for a spin.