In India, Cricket is a religion and Travel is a passion. When you create a fusion of the two, the result is a cracking campaign like Skyscanner Smartsters.

Skyscanner is a really cool mobile app for frequent flyers and essentially helps you to find the cheapest fares while flying abroad to a destination of your choice. It compares flight-fares from a bunch of websites and aggregates the results in a simple & intuitive interface. Last year, Skyscanner had also launched a hotel only app which works on a similar model as their flights’ app. In India, Skyscanner has been very aggressive since the last year and has primarily been focussing on the rising number of outbound travellers.

Skyscanner has also been the official travel partner of Delhi Daredevils for the second year in running. To promote the entire association for IPL 2015 with Delhi Daredevils, they launched #SkyscannerSmartsters, a campaign where fans were invited to give tips to players on playing smart cricket and travelling smart. The whole idea was driven by the insight that most fans have a fine understanding of the nuances of the game and know how to really travel in style.

What did we really love about Skyscanner Smartsters?

Leverage Cross-Platforms – The campaign was executed across all the key platforms – Skyscanner India Website, Skyscanner India Facebook Page, YouTube channel and Twitter handle making it a truly integrated digital campaign. Learning: Doing a campaign across channels helps you to instantly connect with your community. More importantly, if the proposition is different across channels it gives a fresh perspective to your fans giving them an added incentive to follow you on multiple channels. 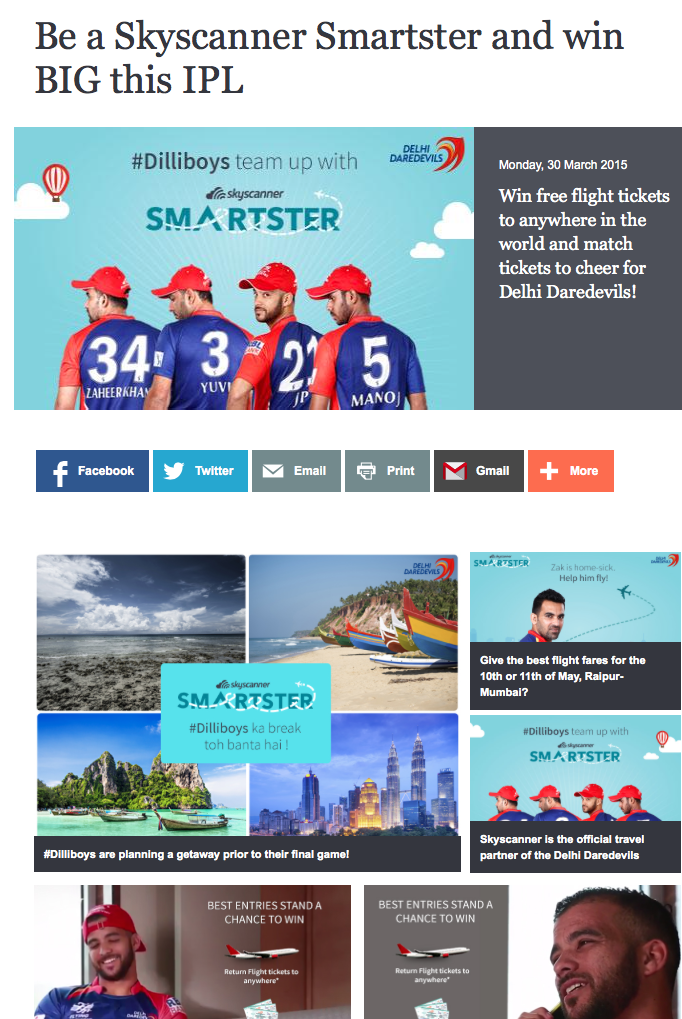 Localisation Wins: The whole idea of using #chatpaticommentary and comparing it with Delhi’s local lingo brought an instant connect with Skyscanner’s fans. Similarly asking your team players to speak in Hindi over the more preferred choice of English was a welcome change. 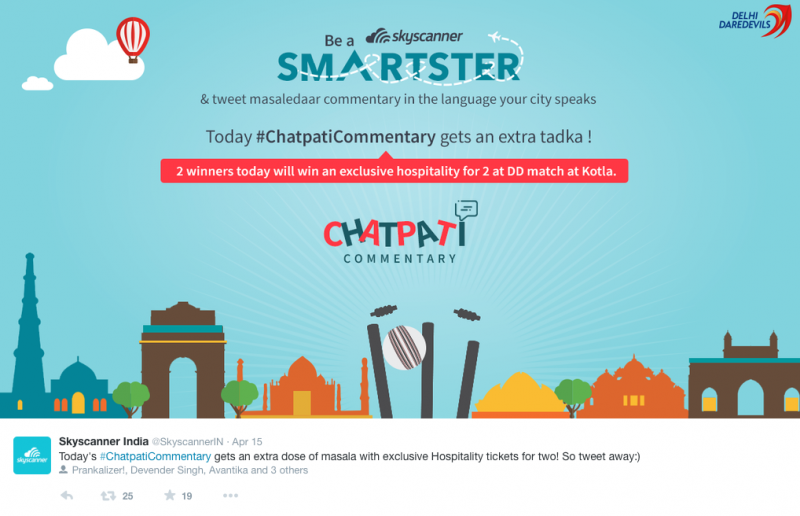 Graphic from Skyscanner India’s twitter feed which shows how they used hindi lingo such as Tadka and Masaledaar to engage with fan-community.

Dynamic & Fresh Content: The problem with most campaigns which span across long duration is fatigue. #SkyscannerSmartsters addressed that challenge in an adept manner by throwing a new question to its fans with on a new match-day of Delhi Daredevils. It kept the fans hooked to the community as they waited for a new question with a new match.

On their Facebook page, Skyscanner India posted fresh questions to engage with their community of fans.

The questions were themed around the travel quotient and linked with the cities where Delhi Daredevils team was playing its matches.

Influencers to Amplify Conversations: Tapping influencers by a brand to amplify the reach of message is not new, but if you get the right mix who can connect with your brand’s overall messaging proposition, the impact it can create is huge. Skyscanner partnered with celebrities and social media influencers who extended the reach of their campaign to new heights.

Did you spot other travel brands engaging with their fan community during major sports events? Do share with us, and we will be happy to feature the best examples.