Dallas Fort Worth International (DFW) Airport and Coca-Cola are partnering to bring holiday cheer to seasonal travellers. On specific dates this month, the Coca-Cola Polar Bear – hidden in giant gift boxes – will be surprising passengers in Terminals A and D with free Coca-Cola products, plush Coca-Cola Bears and other gifts. 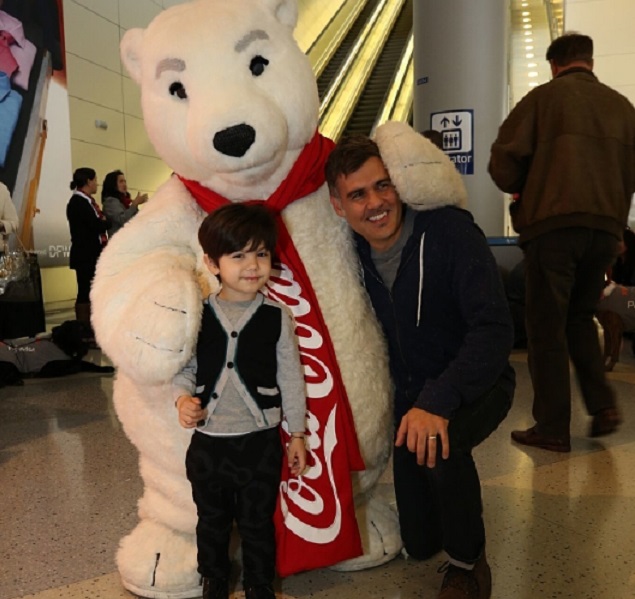 “We are expecting more than three million customers during this holiday season,” said Ken Buchanan, DFW Airport’s executive vice president of Revenue Management. “Thanks to Coca-Cola and all of our partners our customers of all ages can participate in some holiday festivities before heading on to their holiday destinations.”

Moments with the Coca-Cola Polar Bear will be shareable through social media. Airport customers are encouraged to take a photo with the Bears and tag them with #DFWHoliday and @dfwairport.

In addition to the customer surprise-and-delights, DFW and Coca-Cola will be showing support of military members by providing free Coca-Cola products to military service men and women departing between December 18 to December 20.

“The holiday season is near and dear to all of us at Coca-Cola, and we’re thrilled to be spreading some cheer to the millions of passengers travelling through DFW Airport during the month of December,” said Robert Sweeney, vice president and general manager, Dallas Market Unit, Coca-Cola.

This is not the first time DFW Airport has teamed up with Coca-Cola for a customer engagement campaign. In July, Coca-Cola brought its Share a Coke and a Song Zone to the Airport as part of the company’s “Share a Coke” summer campaign.

“Holiday memories can be made anywhere, even in an airport terminal,” Sweeney said. “This season, we hope to be a part of some of the memories created at DFW Airport.”

Also in time for the holidays DFW Airport is launching its “Wish List” campaign to remind customers that that DFW provides a world-class shopping environment for busy travellers on the go.  Retail outlets at DFW offer a wide range of items including accessories, purses and leather goods from the likes of Coach, Hugo Boss, Longchamp, Marshall-Rousso, Swarovski and Talie.  Apparel is also available from brands such as Artizan, Brooks Brothers, Ertekin, Johnston & Murphy, and the Dallas Cowboys Pro Shop.

DFW retailers also offer cosmetics and fragrances, electronics, books, toys and Texas-themed gifts across all five terminals. Additionally, several of the new Duty Free locations in Terminal D are already open, in advance of the highly anticipated new two-level DFW Duty Free complex which will open in the centre of Terminal D in 2017. For more information, visit the DFW website.

Participate in #SingaporeInvites and win a chance to experience Singapore