The option to book a room night at the renowned Marina Bay Sands for less than 70 dollars is too good to be true. And well, that is exactly the case. However, on Cyber Monday (November 28), the website of Marina Bay Sands offered surprisingly low pricing of SGD 62.7 for dates between March 31 to April 7, 2017. The regular prices run close to SGD 500. The pricing was also reflected on many other websites that pull prices by scraping booking websites. Many travellers were quick to jump on it and book a room for the duration and received a confirmation for the same soon after. 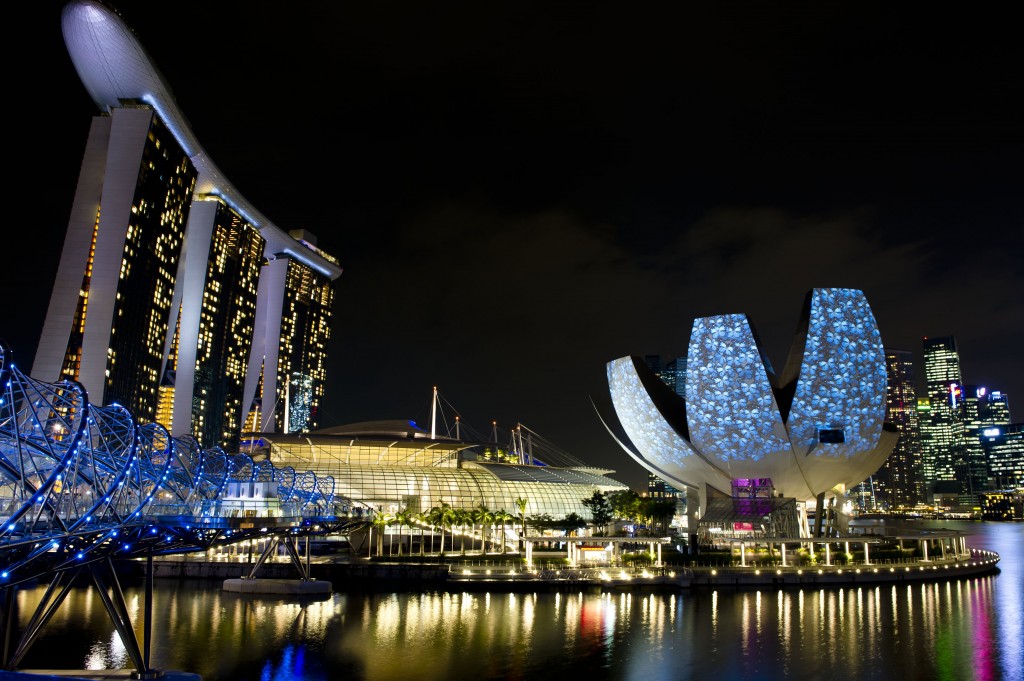 A week later however, the travellers received a communication from the hotel stating that there had been an error on the booking page and as a result of that, the hotel won’t be able to proceed with the reservation. The hotel offered to keep the reservations if the travellers agree to pay the full price of SGD 450 per night and extended a discount of SGD 100 for a week as a goodwill gesture. 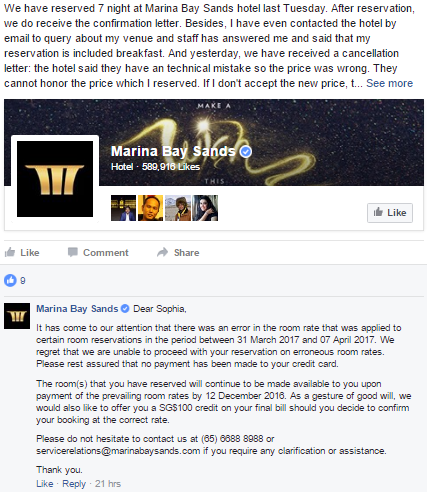 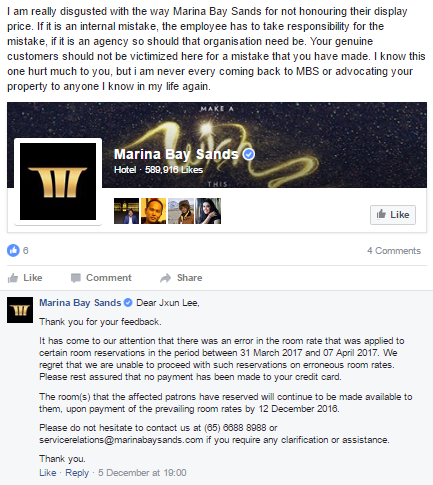 Naturally the travellers who booked were not pleased. The booking terms and conditions mention that in event of a booking being made on an incorrectly posted rate, the hotel reserves the right to correct the rate or cancel the reservation at its discretion but naturally the travellers believe that the hotel should honour the incorrect rates as it was a fault from hotel’s end. Many of them have taken it to social media to express the same and they think that not only is Marina Bay Sands trying to downplay its error but was also too slow to inform people of this issue.

The Facebook page of Marina Bay Sands has recently received multiple one star reviews due to this incident. The social media team doesn’t seem to be handling this too well either. Similar responses to all the posts and no follow up responses are just some of the obvious issues but there might be more than that.

At the time of publishing this story, there were around nine recent 1 star reviews about the issue related to pricing. On 4-5 of these posts, two personal accounts seem to be strongly defending the hotel by posting more or less similar points which makes sense. However, one of the accounts appears to be almost inactive otherwise without any information while the other one is a sparingly used one and this raises suspicion. Are these accounts linked to the hotel staff in any way or employees without a disclaimer? Nobody knows and we can’t really draw inferences without being sure of that. But judging on just the hotel’s responses, the negative feedback could have been handled in a better way. 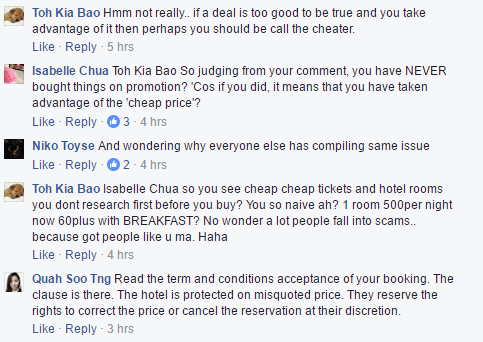 Not all those who booked are genuine buyers though. Some of them actually tried to gain out of the situation and make profit by offering further bookings at relatively marked up prices that were still considerably low for the hotel.

Interestingly the booking terms and conditions have been updated only earlier this year and the clause about reservations made on incorrect prices was added. We looked up web archives to find out that there was no mention of such a scenario on the T&C page till March this year.

Sticky situations arise for brands, even for those high up in the game, but the way they handle it can make a significant difference. If handled well, the brand can turn a mistake into an opportunity to create brand loyalists. Observing how many brands deal with such situations, we also published pointers on how to minimise the damage and turn it around.

Consumers Association of Singapore (CASE), in a statement to Channel News Asia has encouraged the hotel to work towards an amicable resolution to this matter.

‘Spectacles’ are the new sunglasses by Snapchat a.k.a Snap Inc.

Hyperloop One Announces Semifinalists Of Its Global Challenge