With the motive to spread the bike taxi trend in India, 74 BC Technologies Pvt Ltd has launched its bike-as-a-taxi service under the brand name of ‘Baxi’ in Gurgaon. Baxi had raised $1.5 million in seed funding for the launch of this service. 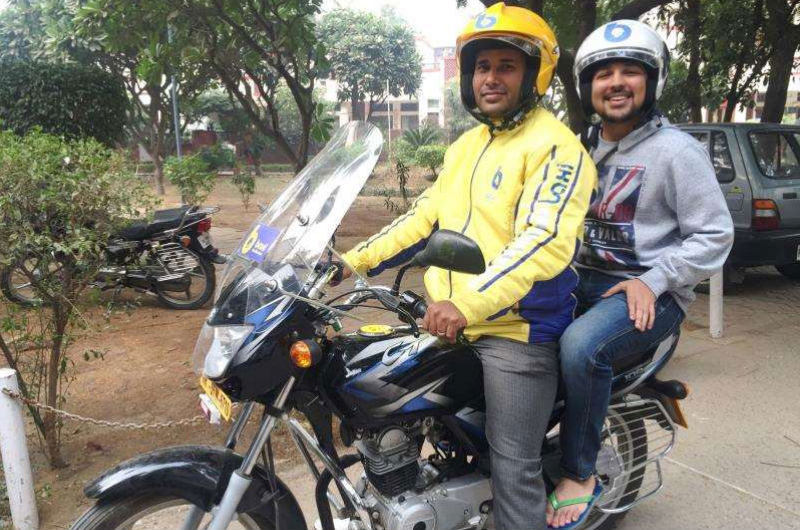 Baxi with a pillion rider

In the first phase, 23 bike taxis have been launched and the service can be used for short distances ranging from 3-5 km. The Government of Haryana allowed the use of commercial two-wheelers to operate as a contract carriage in the city. Following the footsteps of Goa, Haryana becomes the second state in the country to allow bikes to be used as taxis.

Baxi and its drivers:

Deputy commisioner TL Satyaparkash launched the first-ever Baxi service at mini-secretariat. Baxi service will have its hub at the Huda City Centre Metro station.The registered bikes will soon offer affordable last-mile connectivity to many other places across the city. Every bike will be available with an insurance policy and travellers will be covered for accidents. An in-house emergency response team will be established and there will be tie-ups with hospitals across the city. The Baxi drivers will be given extensive training on defensive driving, customer handling, hygiene, etiquette and safety. The travellers will be able to recognise the bikes from a distance as the drivers will be wearing uniforms assigned to them.

Safety of the travellers:

As part of the induction process, the drivers have already undergone police verification and ID cards have been provided to all of them. Their details will be submitted to the RTA and the local police stations. For the safety of the travellers, technology will also be used to monitor every driver in real time, on parameters like speed, location, and safety. Every passenger will be mapped to the driver they are riding with, and they will both have SOS buttons on their mobile apps.

There have been investments from several HNIs and friends of the founders. A few HNIs include: Manish Kheterpal, Managing Partner, WaterBridge Ventures; Alok Mittal, Founder, Indifi Technologies; and Puneet Dalmia, Managing Director, Dalmia Bharat Group. The business is expecting to grow to 500 Baxis in Gurgaon in the next three months. The MD of 74 BC Technologies – Ashutosh Johri stated that Haryana has over 75,000 autos and the state of Haryana can accommodate at least 50,000 Baxis. He added that the startup might soon get permissions from 3 other states soon. In this season, they plan to raise a sizeable next round of investment in the $25-30 million range. Baxi aims to reach 500 bikes in Gurgaon in the next few months.

Baxi has been initiated by IIT graduates Ashutosh Johri and Manu Rana. Ashutosh is a Telecom and IT industry veteran with sales experience in international brands like Ericsson and IBM. Manu Rana has worked in several startups like i2Technologies, Match and BookMyShow.

Interested travellers can give a call on 7799777848 to book a Baxi. Payments can be done using the Baxi wallet or cash. It has a minimum charge of Rs. 10 and for every kilometre the travellers will be charged Rs 4.