VR is increasing becoming the most popular medium for travel brands to inspire travellers and get in the spotlight. After some hotel brands exploring the medium, airlines are moving onto VR next. Air New Zealand offered virtual tours of its fleet of Boeing 777-300ERs. Now Etihad, with their brand ambassador Nicole Kidman, has come up with a VR experience aboard Etihad’s A380 superjumbo. They first introduced a promo video of the sae and few days back, introduced a full length VR video through YouTube and their mobile apps. 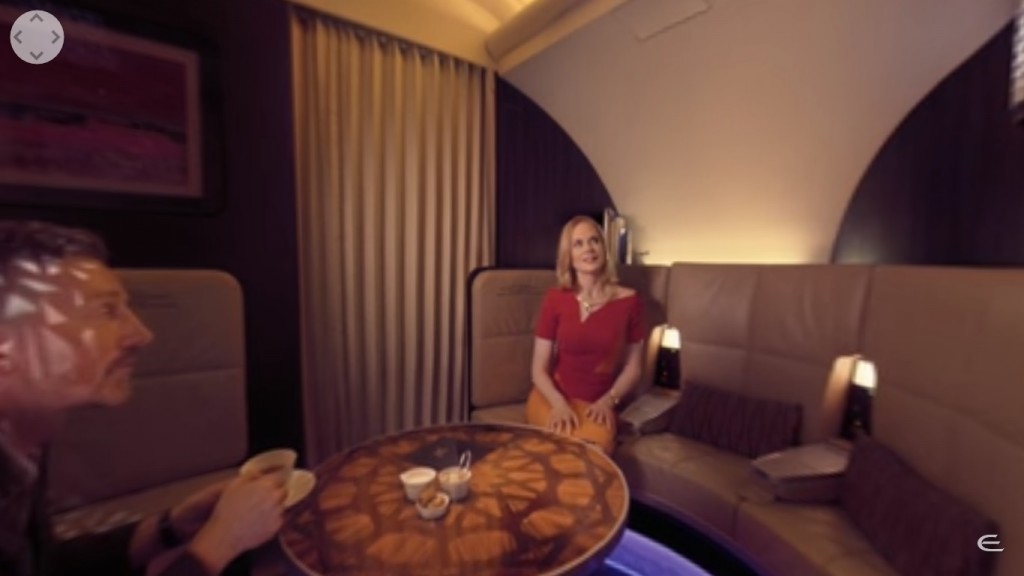 The video offers a 360 degree look inside the interior of the Airbus A380 which is headed from New York to Abu Dhabi during which the actress Nicole Kidman is seen preparing here lines for a movie role and wandering about the cabin. There is no clear story or message that is communicated through the video but it manages to highlight the experience of travelling with Etihad. It also gives a closer look into Ethihad’s private suite The Residence.

Nicole Kidman, Academy Award winning actress and Etihad Airways’ brand ambassador, said: “The film is a culmination of Etihad’s vision to tell the airline’s story in an extremely innovative way and a commitment to engaging with the public as has never been attempted by an airline before. It was a great challenge but one which has definitely paid off and it was great to be part of such an exciting project.”

YouTube supports Cardboard viewer for watching videos and the Reimagine experience by Ethihad makes use of that. Users can also watch the video on desktop and look around using their mouse pointer but that doesn’t offer an experience similar to the cardboard viewer. To offer an even better experience, they have introduced Reimagine app for Android and iOS devices on which the users can first download the VR video in high quality and then watch with or without a cardboard viewer. We took the Android app for a spin and came back quite impressed. The entire video is seamless and hasn’t got even the minor flaws generally seen in VR videos. An app for Samsung Gear VR is also coming soon. Etihad recently did a successful campaign with the actress and the Reimagine campaign is the next step forward.

Shane O’Hare, Etihad Airways’ Senior Vice President Marketing, said: “This immersive VR film is a massive step-change in the way we present the Etihad Airways brand and product to the consumer using highly innovative new mediums. Based on the success of our recent campaign with Nicole, the decision to take this partnership to the next level was an obvious one.”

The VR film took more than six months of effort and was filmed in Abu Dhabi. It has been recorded using a custom rig capable of shooting 6K videos. The video also features stereoscopic sound to further enhance the experience. The aircraft was highly customised to accommodate the camera and lights used to capture an experience as close to real as possible. The film was produced in association with Barbarian Group, a subsidiary of Cheil Worldwide and MediaMonks. You can see highlights of all the work that went into making the VR video in their ‘Making of film’ video.

You can head to vr.etihad.com to find more details about the video or download the app for your devices.

YouTube just made the fight for live videos more interesting