Delta Air Lines and Korean Air have agreed to work together to create an expanded trans-Pacific network to offer more options to customers. The airlines signed a memorandum of understanding to implement a joint venture arrangement to create a combined network serving more than 290 destinations in the Americas and more than 80 in Asia, providing more travel choices to customers of both the airlines. 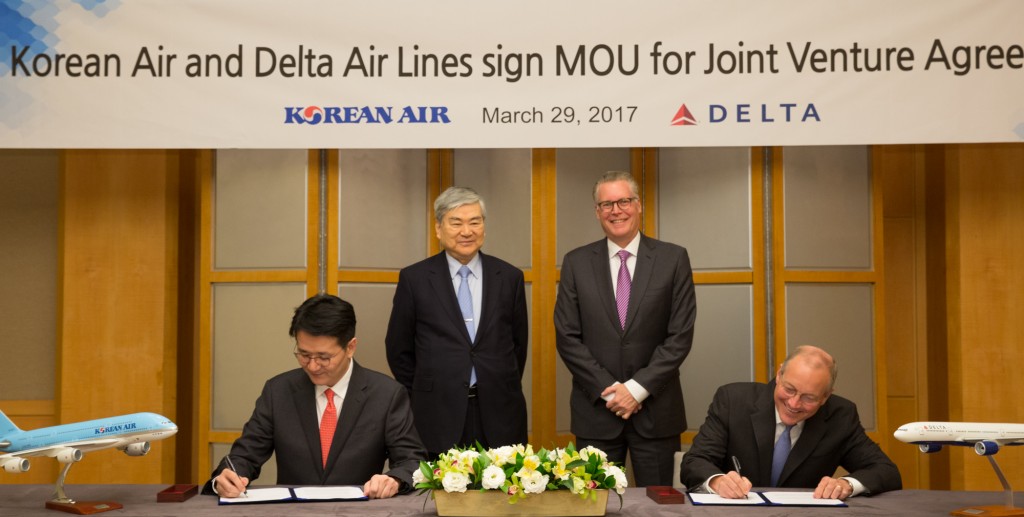 “This agreement deepens our longstanding partnership with Korean Air and will provide the global access and seamless service our customers demand,” said Delta CEO Ed Bastian. “We look forward to providing customers of both carriers with industry-leading service between the U.S. and Asia.”

“This Joint Venture will benefit our customers by providing more convenient connection schedules and widen their opportunities in earning mileages,” said Korean Air’s Chairman and CEO, Yang Ho Cho. “With this agreement, we will reinforce Incheon airport’s position as a major international hub in North East Asia and support the growth of Korea’s aviation industry.”

Both the airlines will work to create a fully integrated trans-Pacific joint venture arrangement, with both airlines sharing the costs and revenues on flights and coordinating schedules for seamless, convenient connections. They will also integrate the frequent flyer programs, Delta’s Sky Miles and Korean Air’s SKYPASS, so that travellers on both airlines can earn and redeem miles on the two programs.

Upon the signing of the final joint venture arrangement, Delta and Korean Air will work together to implement all aspects of the enhanced co-operation including expanded codesharing, frequent flyer programs and joint growth in the trans-Pacific market, with co-location at key hubs with seamless passenger and baggage transit experience.

Delta will be launching new nonstop service between Atlanta and Seoul in June 2017, a flight that complements Korean Air’s existing service, providing customers in the U.S. with greater access to destinations across Asia.

At the same time Korean Air will continue to expand its U.S. – Korea network in summer 2017 with the introduction of a third roundtrip between Los Angeles and Seoul, as well as a second flight between San Francisco and Seoul.