Asia Pacific (APAC) is a growth engine of the global travel industry, with travel gross bookings projected to hit US$392 billion in 2017. Southeast Asia accounts for just 11% of that, but the region’s growing economies and burgeoning middle class populations make it a key area of focus for forward-thinking online travel agencies (OTAs), investors, startups and suppliers.

Much of the appeal is Southeast Asia’s upside. Its online travel population of 39 million represents just 11% of the region’s adult population. As that figure rises, more travel providers are prioritizing this growing population of young, tech-savvy consumers, eager to travel.

Phocuswright’s The Southeast Asian Traveller offers a detailed look at the behaviours, attitudes and preferences of travellers in Thailand, Malaysia, Indonesia and Singapore. Each country has distinctive market realties and consumer habits, as revealed by detailed examination of online travel booking habits.

While online travellers tend to skew younger than the total travel population globally, Southeast Asian travellers are significantly younger than in most other travel markets. 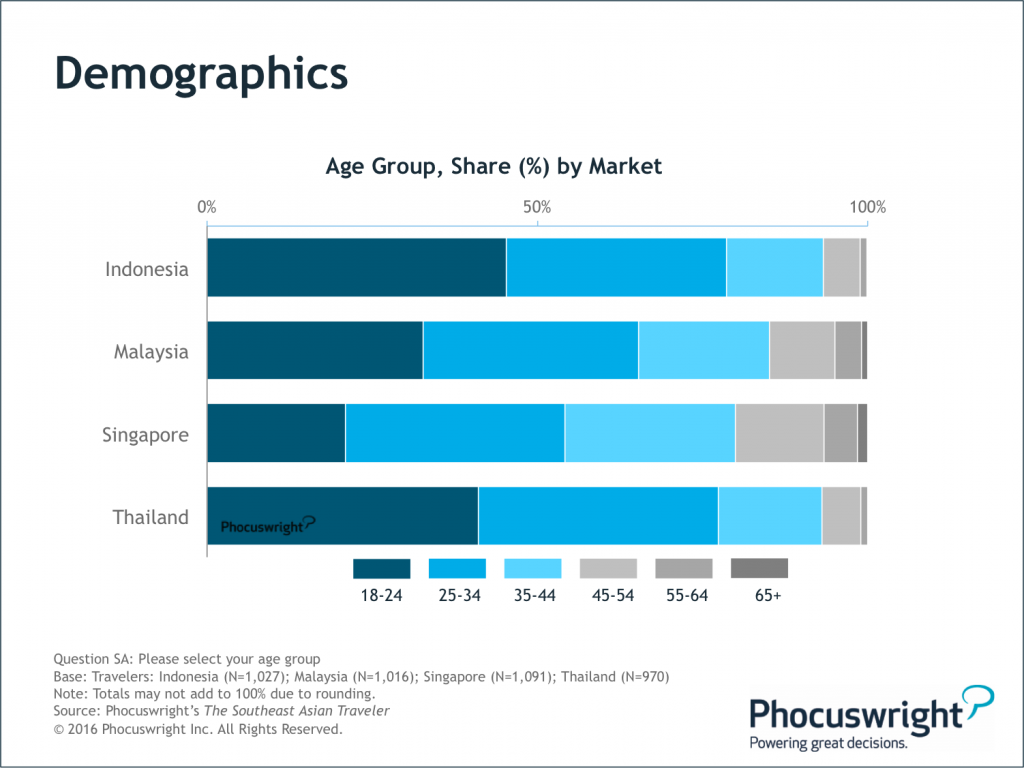 Mobile travel adoption is high, led by Indonesia and Thailand

With high smartphone ownership incidence across Southeast Asia, mobile shopping in general is popular among consumers in the region. The same is true for travel, even though desktop/laptop computers remain the most popular device type for travel shopping and booking across markets.

Mobile travel booking habits reveal a contrast in Southeast Asia – between the more established economies and online travel markets of Singapore and Malaysia, compared to the more recently emerging markets of Indonesia and Thailand.

More Indonesian travellers report booking travel via smartphone in the past 12 months than report booking via laptop or desktop. And although Thai travellers are more likely to use desktop platforms, more than half have used mobile for travel purchases in the past year. Travelers from the more mature markets of Singapore and Malaysia are testing the mobile waters. But they are holding onto desktop bookings in a way their neighbours – who skew younger and have less experience with online travel – are not. 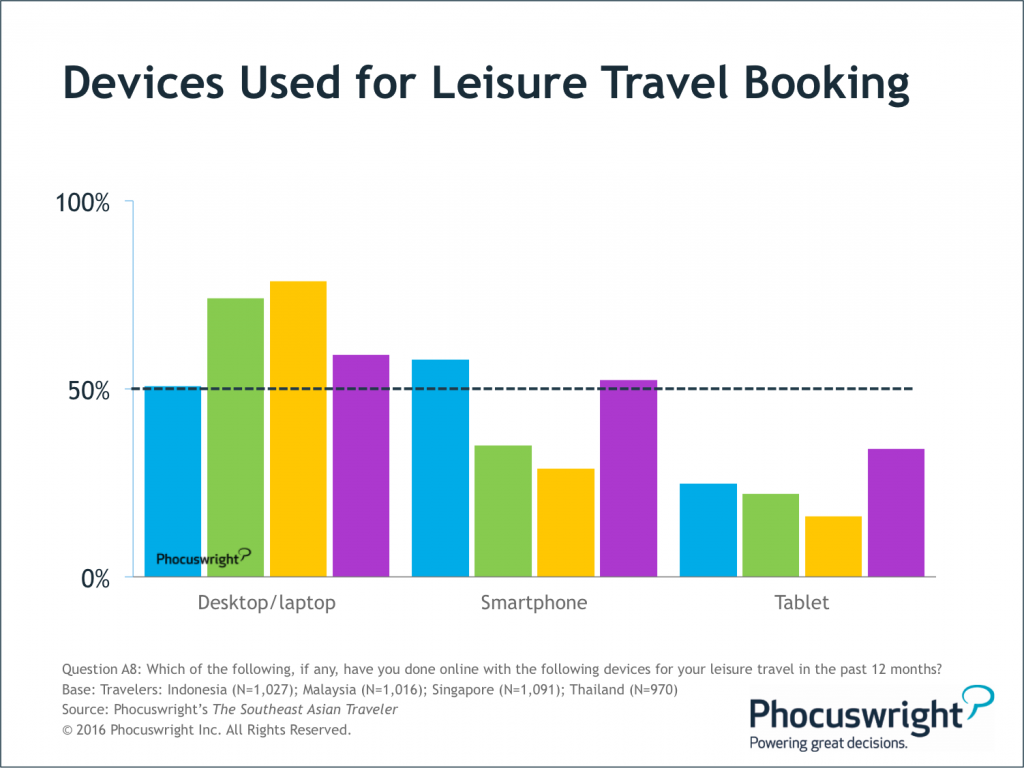 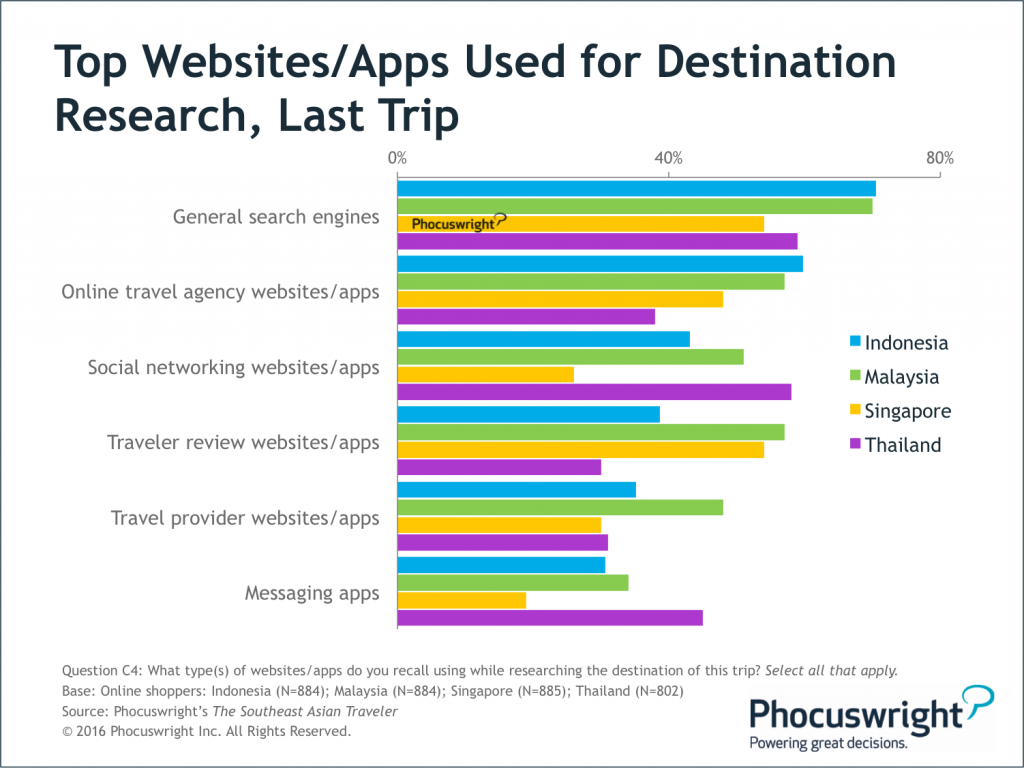 Online travel agencies (OTAs) also play a major role at the top of the funnel in Southeast Asia. Overall, travellers are supplementing their general search engine sessions with visits to a variety of information sources – including sites and apps for social networking, traveller reviews, travel providers and messaging.

Get deeper insights on the Asia Pacific market and network with the change makers in the industry at the upcoming Phocuswright India (February 28 – March 2, 2017, in Gurgaon, NCR, India). The three day event features several sessions with APAC’s leading OTAs including a Joint Interview of MakeMyTrip and ibibo Group, Keynote by Yatra.com and Joint Interview of Fliggy (Alitrip) and Paytm among others.

The registrations are open for just the last few days. Register now to network and learn from Asia Pacific’s most innovative thinkers and leaders in the hospitality, travel and tourism industry.

Is China finally ready to travel?