We have all, at some point of time, faced issues finding our way through an airport. Whether it’s because it was our first time, or there were last-minute cancellations, delays, or gate switches; we have all found ourselves running around in circles forever. To avoid the hassle, KLM Royal Dutch Airlines has come up with what could possibly be the world’s cutest blue robot that will help make that trip from security to your boarding gate a little less hectic.

The robot, called Care-E, will meet travellers at the security checkpoint and take them wherever they need to go with the carry-on luggage on its back. Though Care-E is the product of a Dutch airline, you won’t need to speak Dutch, or English, to operate the robot. 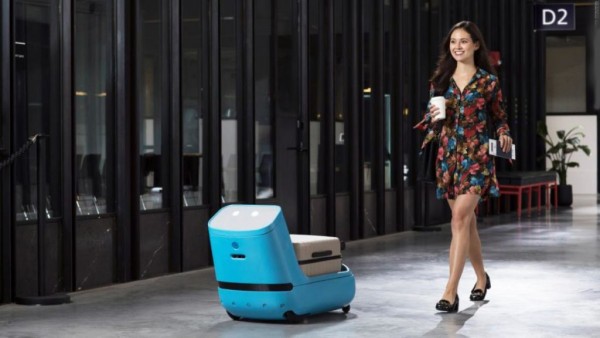 To start a trip with the robot, it will prompt travellers to scan their boarding pass through non-verbal sounds and cues on its screen. KLM will launch the device at New York’s JFK and San Francisco’s International airports before the company decides if it will provide the service elsewhere.

From there, according to KLM, the robot can carry up to 85 pounds of luggage and travel alongside at about 3 mph (the average human walking pace), so it’s probably not the best if you’re running late and need to dash through the terminal to catch your flight. However, if you’re early, you can use it for free with a two-day demo trial. KLM expects the robot guide to launch in either July or August.

The AI technology that Care-E deploys will help it access real-time data. For example, it’ll know if your gate changes and be able to redirect accordingly. The Care-E will be looped into a proprietary API for flight info and have access to a full GPS database of the airport as well. That means that if a traveller’s gate changes, the trolley will know and redirect to that location. A LiDAR sensor array provides collision and obstacle avoidance, while also mapping the environment in 2D. And because KLM wanted to make sure the Care-E is a safe trolley, there are a total of 8 Ultrasonic Rangefinder (five on the front and three on the back) for peripheral collision avoidance. An RGB-D Camera acts as the boarding pass scanner and handles the body detection and tracking. A majority of this tech is located on the front piece or the rear bumper.

Check out how it works-

There have been some companies before KLM who have tried to develop smart airport devices, but have repeatedly failed, mostly due to airport policy changes on batteries. For instance, smart luggage startup Raden announced in May that it had shut down. However, Care-E has an entire airport ready to support the device so it could have an advantage over its past competition.

How non-travel players are foraying into the travel space