Decoding a brand’s reputation management on social media is a tricky proposition for the entire hospitality industry. The number of negative comments and flight-delay queries from customers can easily out-number the occasional appreciation that comes in between.

However to the delight of SpiceJet, this post by Kiruba Shankar, an entrepreneur & a popular Chennai based social media influencer is actually being shared for a positive reason

As stated in his post, Kiruba has appreciated the quick action shown by the entire crew of SpiceJet during his recent flight from Kolkatta to Chennai.

The air hostesses of the airline SG622 went all out to the aid of a shivering passenger who could barely speak during the flight. The way the entire crew handled an emergency situation was appreciated not just by the passengers but is now being shared all over the internet through this post.

At the time of publishing this story, the post had received close to 1500 shares and over 13,300+ likes. 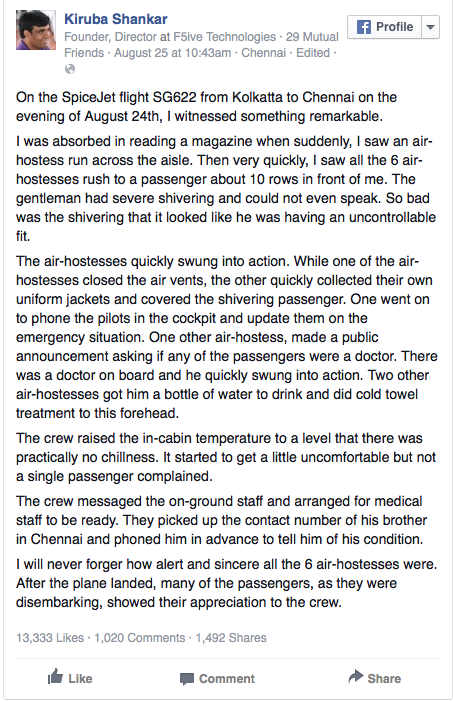 Kiruba’s post about the incident on his FB profile

As consumers, we love reading stories on social media, more so when stories are emotional and actually touch our hearts! This post by Kiruba is a real-life story and a classic demonstration of how a brand’s employees have gone all out to help a fellow passenger. It also shows that relationships between a brand and a customer are made by real life human beings on either side and not by those meticulously planned advertisement campaigns. When customers do go through a positive experience, they want to share it with everyone in the world and that’s why social media becomes an obvious choice.

This tweet below is another demonstration on why social media users value emotions big-time. It was made by a doctor whose father was served by the air-hostess of another SpiceJet flight. The moving picture was RTed by over 39 twitter users.

Spicejet stewardess Aarti feeding my elderly father on flight 413 from MUM to BLR. Very touched by gesture. Thank you pic.twitter.com/zycvskwZQV

While neither SpiceJet or Kiruba expected the story to go viral, we would say a job well done

Update: The story has now been mentioned in SpiceJet’s inflight magazine by their COO, Sanjiv Kapoor 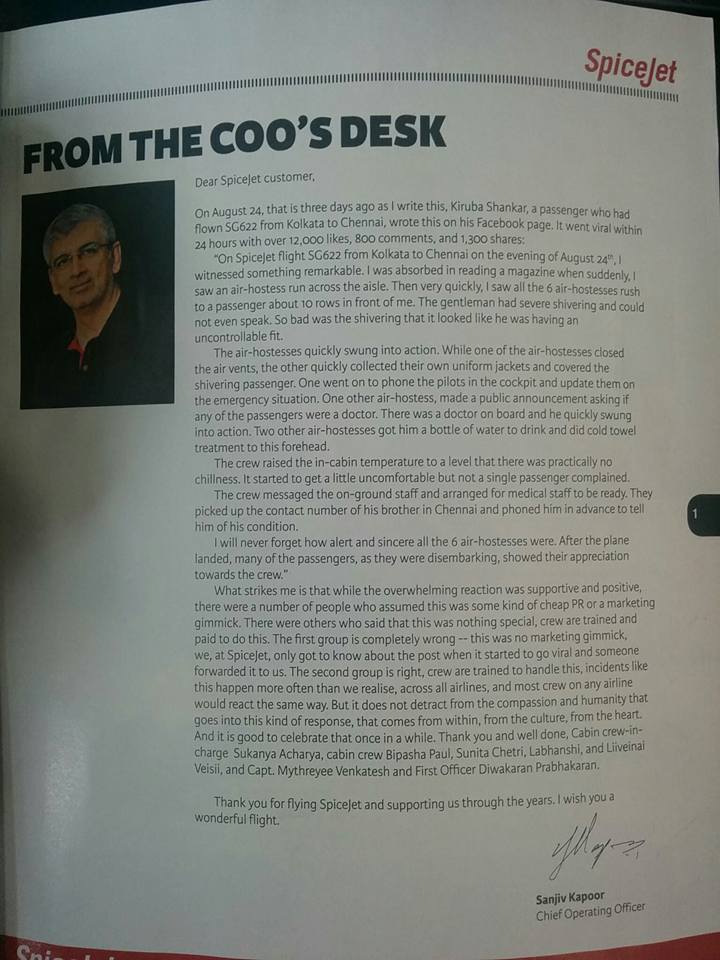 Business Travellers, Google is now going to manage your trips